raksha bandhan par lekh :  In this article we will learn about Raksha Bandhan in detail. Raksha Bandhan is one of the famous festivals of India. It is considered a symbol of brother-sister love.

The festival of Raksha Bandhan is one of the ancient festivals of India. Raksha-bandhan means – the bond of protection, such a protective thread that keeps the brother away from all troubles.

This festival is a symbol of affection and sacred relationship between brother and sister.

Rakshabandhan is such a sacred bond made of a thread of social, mythological, religious and historical sentiment, which is celebrated with great pomp not only in India but also in Nepal and Mauritius by the name of Rakshabandhan.

We have been celebrating the festival of Rakhi for centuries all over India. Nowadays on this festival sisters take Rakhi and sweets to their brother’s house.

After tying Rakhi, brothers give money or some gifts to their sister as dakshina. 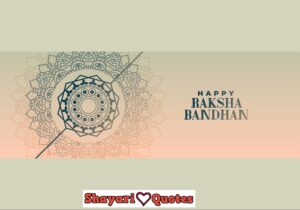 When is Raksha Bandhan celebrated?

Rakshabandhan is a Hindu and Jain festival, which is celebrated every year on the full moon day of the month of Shravan (July-August).

It is also called Shravani (Savani) or Saluno because of its celebration in Shravan (Sawan). On Rakshabandhan, sisters tie a sacred thread i.e. Rakhi on the right wrist of brothers and wish them good health and long life.

On the other hand, brothers take a pledge to protect their sisters at all costs. Rakhi can range from a cheap item like raw yarn to colorful artefacts, silk thread, and expensive item like gold or silver. However, the scope of Raksha Bandhan is much more than this.

The tying of Rakhi is no longer just an activity between brothers and sisters. Rakhi is also being tied to protect the country, protect the environment, protect interests etc.

Although the relation of brother and sister is very special, the way they care for each other, nothing can be compared.

The relationship between brother and sister is incomparable, no matter how much they fight with each other over small things, but still they do not hold back from doing anything for each other.

As they grow older, this relationship becomes even stronger at different times of life. Elder brothers are always ready to protect their sisters, similarly elder sisters guide their younger brothers. 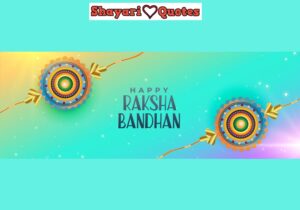 After taking bath in the morning, girls and women decorate the plate of worship.

Along with Rakhi in the plate, there is also Roli or turmeric, rice, lamp, sweets, flowers and some money. Boys and men get ready and sit at the puja or any suitable place to get the vaccine done.

First the desired deity is worshipped, followed by inoculation of brother with roli or turmeric, rice is applied on the vaccine and flowers are sprinkled on the head, his aarti is performed and a rakhi is tied on the right wrist. Brother gives gifts or money to sister.

Thus the food is eaten only after completing the ritual of Rakshabandhan.Like every festival, gifts and special dishes of food and drink have importance in Raksha Bandhan.

Usually lunch is important and there is also a tradition of sisters keeping a fast till the Rakshabandhan ritual is over.

This festival is so widely and deeply entrenched in the Indian society that not only does it have social significance, religion, mythology, history, literature and films are also not untouched by it.

Rakhi has great importance in Jainism too. It is not necessary that those to whom sisters tie Rakhi are their real brothers, girls can tie Rakhi to all and all become their brothers.

On this day sister ties Rakhi to her brother, wishing him good luck. Brother promises to protect her in every situation. Thus Raksha Bandhan is the festival of the sacred affection of brother and sister. 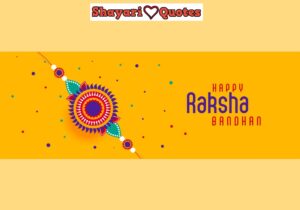 No one knows when the Rakhi festival started. But in the Bhavishya Purana, it is described that when the war started between the gods and the demons, then the demons seemed to dominate. Lord Indra panicked and went to Brihaspati.

Sitting there, Indrani’s wife Indrani was listening to everything. She sanctified a silk thread with the power of mantras and tied it on her husband’s hand.

The story of Shri Krishna and Draupadi is famous in history, in which when Krishna killed Shishupala with the Sudarshan Chakra, his index finger got hurt.

Draupadi tore her sari at that time and tied a bandage on her finger, and in return for this favor, Shri Krishna had promised Draupadi to help Draupadi in any crisis, and because of that, Krishna reciprocated this favor after Cheerharan.

Time paid off by increasing her sari. It is said that the spirit of mutual protection and cooperation started from here in the festival of Rakshabandhan.

When Rajputs went to fight, women used to tie them with a silk thread in their hands along with applying kumkum tilak on their foreheads. With the belief that this thread will bring him back with Vijayashree. There is another famous story associated with Rakhi.

It is said that Rani Karmavati of Mewar received prior information about the attack on Mewar by Bahadur Shah. The queen was unable to fight, so she sent Rakhi to the Mughal emperor Humayun and pleaded for protection.

Humayun, despite being a Muslim, kept the shame of Rakhi and reached Mewar and fought against Bahadur Shah on behalf of Mewar and protected Karmavati and his kingdom.

According to another incident, Sikandar’s wife tied a rakhi to her husband’s Hindu enemy Puruvas (Porus) and made her his brother-in-law and took a vow not to kill Alexander during the war.

Puruvas tied a rakhi in his hand during the war and, honoring the promise made to his sister, donated life to Alexander.

It is also mentioned in the Mahabharata that when the eldest Pandava Yudhishthira asked Lord Krishna that how can I overcome all the troubles, Lord Krishna advised him to celebrate the festival of Rakhi to protect him and his army.

He said that this silk thread of Rakhi has that power by which you can get rid of every objection. At this time there are many references of Draupadi tying Rakhi to Krishna and Kunti to Abhimanyu. There are many literary texts in which a detailed description of the festival of Rakshabandhan is found.

The most important of these is the historical drama Rakshabandhan of Harikrishna Premi, whose 18th edition has been published in 1991.

It was a masala film starring Dara Singh. Similarly, in the year 1976, Shantilal Soni had also made a film named ‘Rakshabandhan’ about Sachin and Sarika.

On this day sisters tie rakhi on the right hand of their brother and apply tilak on his forehead and pray for his long life. In return, the brother promises to protect them.

Rakshabandhan is a festival to strengthen relationships with the bond of intimacy and affection. This is the reason why there is a practice of tying Raksha (or Rakhi) on this occasion not only to sister-brother but also in other relationships.

He should use it properly in his future life so that he is successful in protecting the dignity of the teacher along with his knowledge.

According to this tradition, even today, before any religious ritual, the priest ties the rakshasutra to the host and the host to the priest. In this way, both of them bind each other in their bondage to protect each other’s respect.

Rakshabandhan festival has been a cultural measure of social and family unity or unity. After marriage, the sister moves to a different house.

On this pretext, every year, not only her relatives but even brothers of distant relations go to their homes and tie rakhi and thus keep renewing their relationships.

There is a mutual sum (milan) of two families and clans.

This festival is also used as a unity among different sections of the society. Thus the link that has been broken can be rekindled.

This festival was also resorted to for public awareness in the Indian freedom struggle.

Famous Indian writer Rabindra Nath Tagore believed, Raksha Bandhan is not only a day to strengthen the bond between brother and sister, but on this day we should also strengthen our relationship with our countrymen.

This famous writer was broken after hearing about the partition of Bengal, the British government had divided this state under its divide and rule policy. This partition was done on the basis of increasing conflict between Hindus and Muslims.

This was the time when Rabindranath Tagore started the Raksha Bandhan festival to bring Hindus and Muslims closer to each other, he asked people of both religions to tie this sacred thread to each other and protect them.

Relations between the people of both the religions should be strengthened.

In West Bengal, people still tie rakhi to their friends and neighbors to promote unity and harmony.

when is raksha bandhan 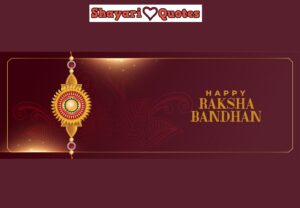 Attractive envelopes worth ten rupees are sold on this occasion by the Postal Telegraph Department of the Government of India.

The cost of the envelope is Rs.5 and postage fee of Rs.5. In this, on the occasion of Rakhi, sisters can send three-four Rakhi to their brother for just five rupees.

Under this gift given by the postal department to the sisters, a Rakhi envelope weighing 50 grams can be sent for only five rupees,

whereas only one Rakhi can be sent in a normal 20 grams envelope. This facility is available till Raksha Bandhan only.

Keeping in mind the rainy season on the occasion of Rakshabandhan, the postal telegraph department has also provided waterproof envelopes that are not damaged by rain since 2007.

These envelopes are different from other envelopes. Its shape and design are also different, due to which Rakhi is more secure in it.

The government also makes provision for free travel for girls and women on this occasion.

Today’s modern technological age and information communication era have also had an impact on festivals like Rakhi. Many Indians nowadays live abroad and their family members (brothers and sisters) are still in India or other countries.

After the advent of the Internet, many e-commerce sites have opened, which take online orders and deliver them to the given address.

In this way, due to today’s modern development, brothers and sisters living far and wide, who cannot meet on Rakhi, celebrate this festival by seeing and hearing each other in modern ways.

Today this festival is the identity of our culture and every Indian is proud of this festival. Today many brothers are unable to tie rakhi on their wrists just because their sisters were not allowed by their parents to enter this world.

It is a matter of shame that in a country where the law of worship of girls is in the scriptures, cases of female feticide come to the fore. This festival also reminds us how much importance sisters hold in our lives.

Rakhi has a special significance for brothers and sisters.

Many of these brothers and sisters are not able to meet each other due to professional and personal reasons, but on this special occasion, they definitely take out time for each other and celebrate this holy festival, which shows its importance.

We should celebrate this great and holy festival with joy and moral values ​​while protecting the ideal.